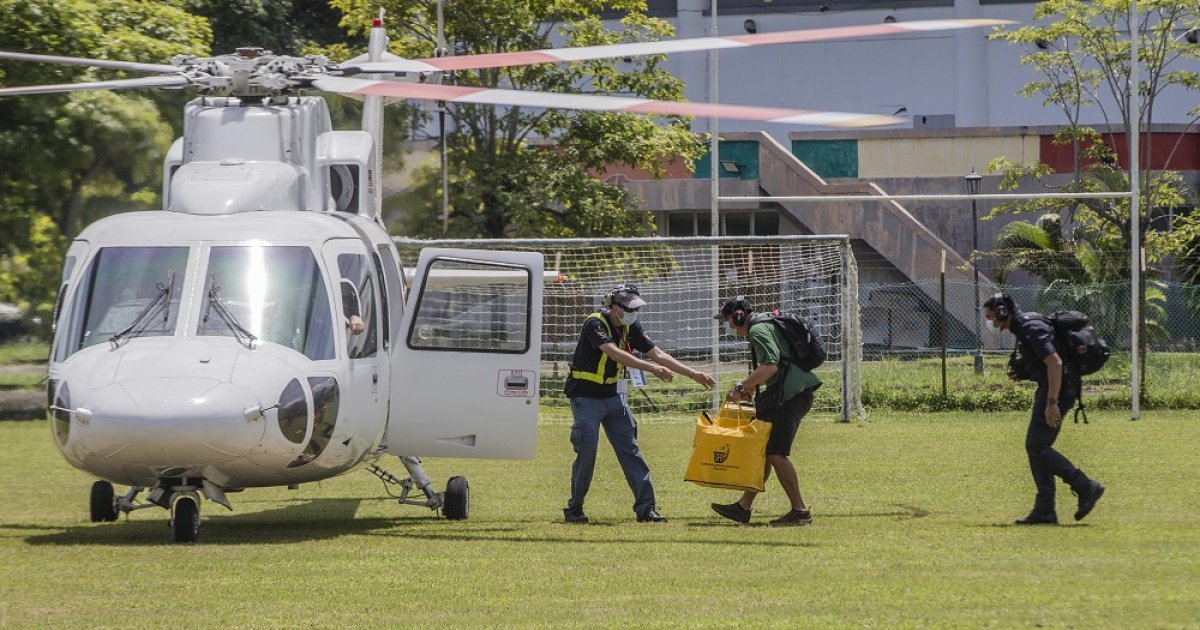 KUALA LUMPUR, Oct 22 — Fresh off the state election in Sabah, Malaysia is now dealing with a third wave of Covid-19 cases, blamed on the carelessness and complacency that marked the campaign period.

As Malaysia expects to hold a few elections soon — namely the Batu Sapi parliamentary by-election in December and the Sarawak state election by June next year, and possibly the 15th General Election (GE15) within a year — public health experts are worried there will be repeats of the Sabah situation as long as the pandemic is active and no effective vaccine is available.

Which is why they are calling for the expansion of postal voting or other methods of absentee voting.

“Postal voting can be applied. So people can post their vote and be counted,” said Prof Dr Marzuki Isahak, a specialist at the Department of Occupational Safety and Health at Universiti Malaya.

He said Malaysia needed to encourage any system of voting that would prevent people from gathering in one place to vote.

Dr Mas Ayu Said, an epidemiologist at the Department of Social and Preventive Medicine at Universiti Malaya, agreed.

“We really have to prepare (for the elections). We cannot have what we (had) in Sabah. We must think of another way of doing elections,” she said.

As of Oct 18, 443 travellers from Sabah, most of whom were involved with the election, have tested positive for Covid-19 and generated at least 24 clusters in other parts of Malaysia. From single-digit figures in August, Malaysia saw its highest daily cases of 871 on Oct 18.

So are elections another thing that Malaysians will have to adapt to doing remotely due to the pandemic?

Easier said than done, said the Election Commission (EC). While Malaysia does have a vote-by-mail system, expanding postal voting to everyone is not possible for the time being.

As it stands, a few groups are allowed to vote by mail. They include essential workers, such as healthcare workers, police, diplomats and most overseas Malaysians. Ordinary Malaysians living in the country, however, do not qualify for postal voting.

Prior to Covid-19, Malaysia did not do much to expand postal voting other than allowing overseas Malaysians to cast postal votes beginning in 2013. In the past, politicians and groups regarded postal voting with suspicion, alleging it was more susceptible to fraud and should therefore receive greater scrutiny and security.

EC member Zoe Randhawa seems daunted when faced with the idea of opening postal voting to millions of people for GE15, while also ensuring everything is done properly and transparently within a short time.

“We have a tendency in Malaysia to distrust our elections, (either) rightly or wrongly. So we can’t just introduce this and then people don’t trust the system. And it actually backfires and people don’t want to use the system for their postal votes,” she said.

She said EC is planning to expand postal voting to a few more groups, such as the sick, hospitalised and incarcerated, although there is no specific deadline when they will be officially added to the list.

She said another group is also being considered — Malaysians living in border countries and zones, such as Singapore, Brunei, Southern Thailand and Kalimantan — because of Covid-19.

Unlike other overseas Malaysians, people living in these areas cannot vote via post because of their proximity to the country. In GE13 and GE14, voters there were required to cross the border and go home to vote.

But with the pandemic, borders are closed and should a general election be called while outbreaks are active, these Malaysians would not be able to vote.

Thomas Fann, founder and chair of Bersih 2.0, a non-governmental group advocating free and fair elections, said it was important to ensure that pandemic restrictions did not disenfranchise voters.

“With the Covid-19 situation, the need to be able to cast votes safely without travelling too far is very, very important,” he said.

Due to the pandemic, the number of postal voters from presently eligible groups is expected to explode because of all the travel restrictions in place in the country and in the world.

According to the United Nations Department of Economic and Social Affairs, Malaysians living overseas numbered more than 1.7 million in 2019. About 46 per cent of them live in Singapore, the largest group of Malaysians overseas per the World Bank.

Used to dealing with thousands of postal voters — in 2018, the EC received 7,979 requests — the EC may have to deal with at least tens of thousands now.

As such, Randhawa said they must strengthen the postal voting process from start to finish, from processing applications to printing and mailing out the ballots, and then to receive and process the votes in a timely manner.

However, the one group the EC decided against adding to the list of postal voters, for now, is the elderly, who doctors say are the ones most vulnerable to the coronavirus.

No postal votes for the elderly

A few countries are holding elections in the next few months, with the most famous being the United States. There has been a sustained push by various voting rights groups to encourage the elderly, who are at high risk of dying from Covid-19, to vote by mail.

Which begs the question, why isn’t Malaysia doing the same for its elderly?

According to Randhawa, the EC had considered adding elderly voters as postal voters but ultimately rejected the idea for several reasons.

Chief among them is that the commission does not have the capacity to process applications and postal votes by the elderly — those aged 65 and above comprise 2.3 million of the population — in time.

“We can’t open up postal voting to an enormous number of people without having the capability of ensuring the integrity of that process,” she said.

Randhawa said the EC also did not want to risk the elderly turning in defective ballots as they were more prone to making mistakes.

She said postal votes already have a higher risk of being rejected as it requires the voter to fill out an identity declaration form in a particular way.

“There is no specific regulation to allow small errors in the form so any tiny error in the form could lead to a rejected ballot,” she said.

According to political aggregator blog FiveThirtyEight and studies done on absentee voting in the United States, mail-in ballots have rejection rates of up to three times compared to normal votes. But the rejections are mostly attributed to inexperience, not age.

Randhawa said the EC would continue working on improving the absentee voting system and to make elections more accessible in preparation for other emergencies in the future.

However, she said many of these changes may not be ready should the government call for a snap election next year.

Though many may question the wisdom of having a snap election during a pandemic — estimated to cost RM1.2 billion — most political experts agree an election is the only way to end the political turmoil that has marred Malaysian politics since the collapse of the Pakatan Harapan government in February. The current Perikatan Nasional coalition government has been deflecting accusations of illegitimacy since then.

Universiti Malaysia Sabah political scientist Dr Syaruddin Awang Ahmad said the election cannot wait until 2023, which is when GE15 is due but must be held soon after the Covid-19 situation is brought under control.

“During Covid-19, the worst-case situation is to live with a political standoff, which I think (will not be able) to produce any plan to resolve issues related to the lives of the people.

“Until we are at least able to control or flatten the curve as the Health Ministry said, until we are very confident that we can… open all sectors, then that is the right time for us to have a general election,” he said.

Fann agreed but with some caveats. He said elections should not be called until the EC has finished with the automatic voter registration and some of the changes to the postal voting system have been implemented.

The voting rights activist said holding an election while pandemic restrictions abound would disenfranchise many voters, something that would cast a shadow on the legitimacy of the winner.

“When you have a low voter turnout, it is still legitimate, but the fact that if less than 50 per cent of people did not vote, you cannot be sure that this is the government that represents all,” he said.

He said his group has already noted the effect Covid-19 has on elections, comparing voter turnout for the Sabah election of 66.61 per cent to GE14’s 82.32 per cent.

To help prevent that, he said the EC should require a 21-day campaign period to give enough time for postal votes to arrive.

“Every vote counts. Every voter is important,” he said. — Reuters